As many of you know, when my wife and I purchased our home it came with an ancient willow tree in the backyard. Shortly after moving in we had an arborist inspect it and learned that it was rotten and required removal. As they were cutting it down they found a honey bee colony inside and I had them leave the remaining phallic tree standing in the yard for months until I had time to deal with it.

A few weeks ago, due to a number of circumstances, we had to get the remaining tree down, hive and all. I piled mulch up at the point where I expected the hive opening to hit the ground. Thankfully, as the tree fell, the hive opening landed directly on the mulch, leaving the bees unable to escape for 20-30 minutes as the rest of the wood was removed.

Finally, after removing the wood, my friend and I heaved the massive, bee-filled stump onto it's end so that the bees could resume foraging. The bees were completely calm after their violent ordeal. 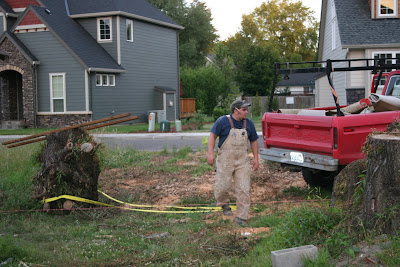 Last week we finally had the truck and people available to drag the 500+lb. stump next to my two top bar and Warre hives in the yard. The dragging went well, and I left a small hive at the old stump location to collect the remaining foragers who returned to find their hive missing. 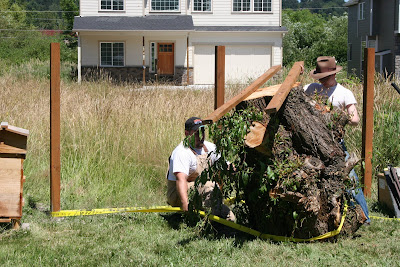 This past week the weather has been terribly hot (for the Portland, OR area), reaching the mid-90s on some days. The bees in all my hives have been bearding accordingly, but the tree stump hive was especially beard-y, with what looked like at least a few thousand clumped over the small entrance all day and all night. 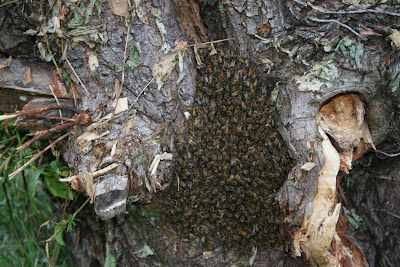 Three days ago I was squatting in front of the stump hive, observing the mass of bees as they would gently part to allow foragers to push their way through. Then the swarm began. Thousands and thousands began billowing out of the stump, tumbling, rolling and falling out of the hive onto the ground, into the air, onto me, etc.

The cloud hovered for a moment and then began moving up, up into our neighbor's maple tree to a branch at about 25-30 feet high. The stump looked almost entirely depleted of bees. Fresh, yellow-white combs could be seen where thousands of bees once rested. A few fuzzy, obviously young bees remained, wandering aimlessly around the entrance of the hive, deserted by their colony. 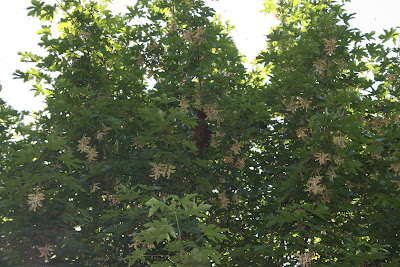 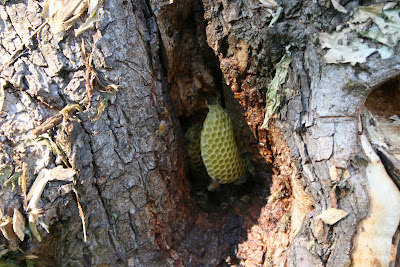 I was eager to use a crazy German method of removing swarm clusters from high branches that makes use of a combination of 4" pipes, a funnel and a stocking. I attached the funnel at the one end of two 10' pipes and tied one of my wife's stockings to the other. The idea is that while prodding the bee clump with the funnel, the bees fall down the pipe into the stocking. Once they are all in one can simply dump them into a hive and all is well. 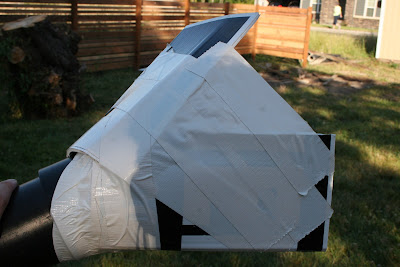 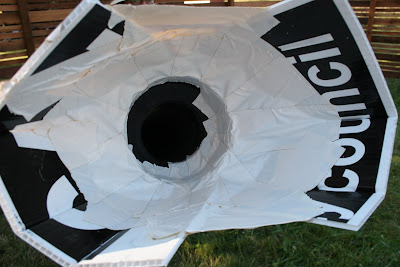 One suggestion: Buy schedule 200 pipe -- nothing larger! 20' of thick pipe becomes very unwieldy when you're attempting to finesse 30,000 bees into a funnel.

With the help of my wife, our neighbor and a couple of ladders, we were finally able to reach the bee clump and I prodded them a few times with the funnel. It began working. Bees were falling down the pipe into the stocking. We brought down the contraption carefully and set it on the ground. At least half of the clump was buzzing unhappily in the funnel. I dumped them into a small nuc-sized top bar hive I had on hand and then unattached the stocking and dumped the remaining bees in the box and closed it up most of the way.

As I was closing it, however, I noticed something odd: Hundreds of disfigured, blackened bees. Some were missing heads, abdomens, legs, etc. Two gentle prods with a funnel constructed out of a political sign couldn't do this, I thought. They looked like bees that had been overheated or had water poured on them. Update: While reading American Bee Journal I was reminded that when bees overheat they often vomit up their stomach contents, which can give them a wet appearance. This often happens to packages when they overheat. This could explain the wet, blackened look of the bees.

The dead and dying bees: 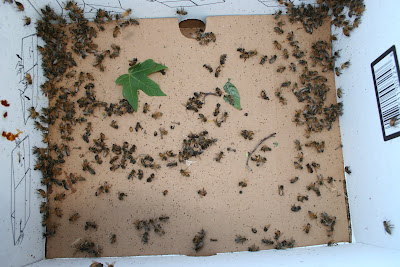 Notice the blackened coloring of the bees, as well as the wetness: 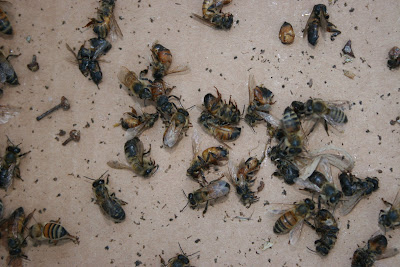 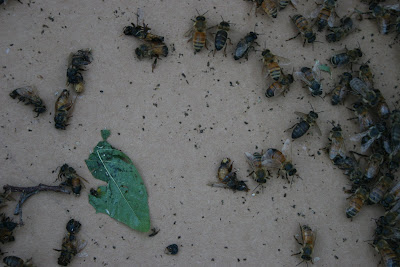 After 20-30 minutes the bees were piling out of the box, an obvious sign that the queen was still up on the tree branch. I looked inside the box after most of the bees were out to inspect the remaining bees, corpses and parts. It was a ghastly sight. My only conjecture is that when the hive was 20' up in the Willow Tree, shaded by leaves and branches, they never experienced the temperatures that they did when they were cut down and moved to the direct sunlight next to my other hives. While all of the other hives have ample room to cluster, fan, and manage the hive temperature, the stump entrance is only a couple inches wide and was covered from top to bottom with thousands of bees, with no noticeable fanning. Over the week of high temperatures they were essentially cooking inside of the stump and finally couldn't take it more and decided to abscond.

Some of the bees could have certainly been injured by the funnel prodding, but the extent of the damage was far greater than could be sustained by a couple pokes with a flimsy funnel.